Can Alligators Show Us How to Regrow Teeth?

Contact Us
Can Alligators Show Us How to Regrow Teeth?

Most people tend to focus on vanity, when they think about problems associated with missing teeth. In reality, however, missing teeth can cause serious problems, such as bone resorption, temporomandibular joint disorder and nutritional deficiencies related to dietary restrictions. Sadly, millions of Americans endure these problems on a day-to-day basis. According to a group of scientists, however, someday soon, people may be able to regrow teeth just like one of the Earth’s few living fossils. 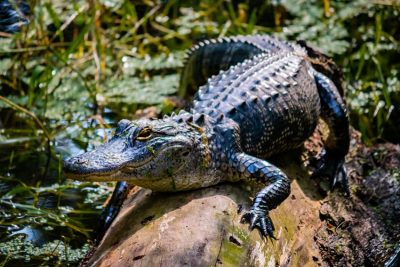 Researchers out of the University of Southern California are studying the way alligators regrow teeth to see if they might be able to duplicate the process in humans. Amazingly, these giant reptiles can regrow teeth as many as 50 times if necessary, thanks to stem cells which remain active and available within the gums for the duration of the creatures’ lives. Published in the Proceedings of the National Academy of Sciences, the study determined that alligator mouths actually harbor three sets of individual teeth: a fully grown one, a baby tooth which lies dormant beneath and a stem cell, which is ready to become a new baby tooth as needed. According to the researchers, they hope their study will one day allow dentists to inject patients with hormones that will prompt the body to grow new, fully-functional adult teeth in the event of tooth loss.

A Modern Solution to Tooth Loss

Every day, it seems as if scientists unveil some type of new discovery which points toward an exciting future. That said, most of us aren’t likely to live long enough to see a day when dentists can promote tooth regeneration.Fortunately, if you have missing teeth, you don’t have to wait for some futuristic, theoretical treatment to become reality. Thanks to modern dental implants, you can regain the freedom to eat what you want, while also enjoying the confidence that comes with having all of your teeth. Don’t spend another day living without teeth, when Drs. Ken and Marnie Collins provide dental implants which are just as good as the real thing. To learn more, contact their office today.